While many of my friends were at Comic Con in San Diego last weekend, meeting costumed heroes, I spent the weekend training 15 2-6 year olds to be superheroes. We celebrated G’s 5th birthday with a Superhero Training Camp for all his friends. With a large yard including 2 play structures and a monster truck tire, not to mention the climbing gym with rope swing, I knew we would have no problem coming up with challenges for the aspiring superheroes. 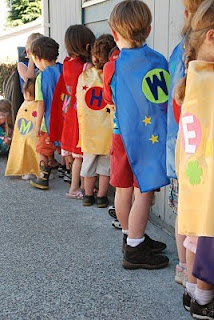 As everyone arrived on the big day they partook of hero sandwiches and used their powers to change the color of their drink (with star shaped juice & koolaide icecubes). I rounded up the troops for a little calisthenics. Then I presented the Superhero Training Manuals (made by my Sis) which they took to each station to receive a sticker after completing the challenge. 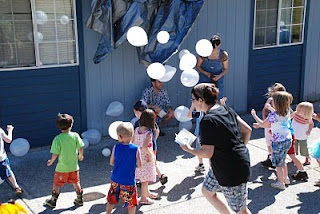 Suddenly two villains (dads) in masks appeared on the roof and rained a shower “rocks” (balloons) down on the heads of our intrepid trainees. Testing their ADAPTABILITY they were challenged to a ROCK SMASH leaving no balloon unpopped. Moving on to the OBSTACLE COURSE, our novice superheroes demonstrated their ENDURANCE climbing, sliding, running, and jumping. This was followed by MARKSMANSHIP, tossing WATER BALLOONS at more bad guys (printouts in Ziploc bags hung along our garden fence so they watered the garden at the same time). Next up, an assessment of STRENGTH with a ROCKET LAUNCH, two different rockets throwing and stomping to see how far they could make them fly. Finally, our apprentice heroes made their way to our climbing shed to exhibit their AGILITY. They were instructed to ROPE SWING over (stuffed) snakes and seamonsters, and ROCK CLIMB up a wall to ring a bell. 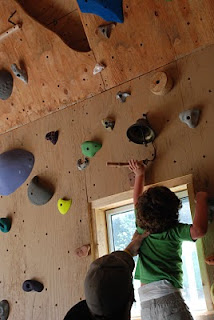 Once they had received a sticker for each challenge, their TRAINING complete, the NEW SUPERHEROES came inside (out of the summer heat) to design their own superhero cape and mask. With six cape colors to choose from, they used adhesive felt and stencils to cut a shape and their first initial for the back of the cape. To really make their capes and maskes unique, they decorated both with precut felt stars, flowers and butterflies. Then donned their new uniforms and headed back outside to save the day. 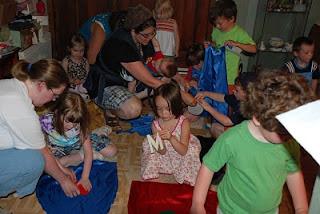 Meanwhile… Venom (our homemade piñata) had eaten all of their SUPERHERO SUPPLY KITS! Our new Heroes took turns swinging a stick until Venom was in pieces revealing all of their goodies. Their KITS included a “Power Ring, Super Sticking Gum, Throwing Disk, Sparkle Floam, and Energizing Tootsie Pop”. After more playing and photo ops everyone headed back inside for a piece of Super G cake and red & blue jello parfait. All in all, a very good day and a very happy birthday boy! 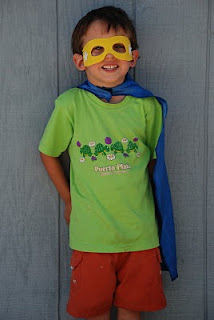 Resources & more pics will have to wait for another post. Still gathering the pics from several helpful friends. Thanks Simple Mama for these pics so far.
Posted by Laurinda Reddig