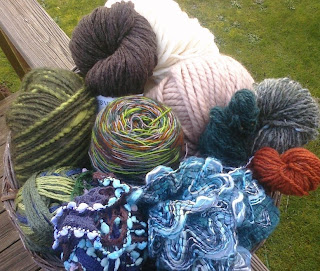 My Haul (limited myself to wool for current felting projects,
self-ruffling yarns, & one light wt Madelinetosh)
This past weekend the Local Yarn Stores of the the Portland, OR Metro area hosted the 5th Annual Rose City Yarn Crawl. "An annual Portland experience, the Rose City Yarn Crawl is a four-day event for knitters to explore the many knitting Shops in and around Portland. 2012 marks our third year of celebrating Portland as a yarn and knitting destination." Um. Yeah. Let's ignore more than half the fiber craft population! Many of these stores have yarn and fibers for crocheters, spinners, and felters too!

Several fellow "hookers" came down from Seattle, including the Fearless Leader of the Crochet Liberation Front and Craftwich to represent the hook at this obviously needle-centric event. We were joined at various points along our travels by a dozen or so other fiber friends and managed to hit 15 yarn stores in just 2 days.

We did a little online research ahead of time, reading the descriptions of each store and their websites. We wanted to be sure to hit any stores which made it clear they supported crocheters. Out of 19 stores, only TWO offered a crochet pattern as their special yarn crawl freebie pattern (Angelika's and Wynona Studios where the owner's daughter was even crocheting!). I did talk to several of the store owners who were interested in offering a crochet alternative for next year, and am already lined up to design at least one of them. I also talked to a few yarn companies, encouraging them to have crochet patterns designed with their yarns.

I was somewhat appalled by the complete lack of crochet samples and patterns in so many of the stores! Don't the store owners realize that crocheters buy yarn too? Several store owners carefully explained that they simply do not sell many crochet products, but they will carry more if they sell more. But when a crocheter walks into your store and sees not one single sample made from crochet and walls and books of knit patterns, why would they come to your store again?!

At least now I have discovered a few new favorite LYSs for when I'm hunting the perfect fiber for a new design, and have a better idea what each store has to offer, and does not have. I even ended up giving impromptu crochet classes in two different stores on crocheting with ruffle yarns and reading stitch diagrams.
Posted by Laurinda Reddig

Email ThisBlogThis!Share to TwitterShare to FacebookShare to Pinterest
Labels: crochet, spin a yarn