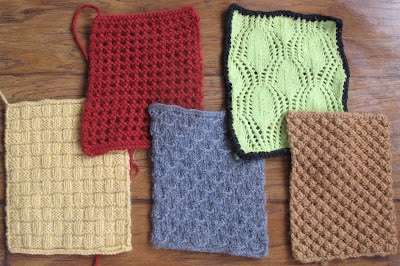 The other day my Dad, the knitter in the family, stopped by to bring me a pile of little knit squares he made many years ago. He says these squares, and many more like them were scattered around our house when I was growing up. I do have vague recollections of these bits of fibery textured goodness throughout my childhood.

Perhaps they were the first seeds that would later lead to my complete obsession with fiber and the possibilities of texture when combined with hook or needles. Check out how similar these patterns are to some of the crochet stitches used in my Rowan's Learn To Crochet Sampler Afghan! I love how most knitters assume that the basket weave MUST be knit. 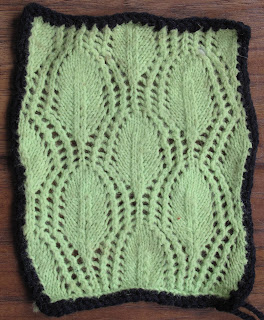 My Mom added the crocheted edging to this Feather Square, and she planned to add crochet to the rest so they could be sewn together. Dad says that she never got around to edging the rest of the squares, so he eventually stopped making the squares. That's his story anyway, I am sure she remembers it differently. I bet she got frustrated with trying to get the right number of single crochets for a flat edge that does not pucker - that would make a great future post for Tutorial Tuesdays!

Either way, he was taking an extended break from knitting by the time I was of an age to learn, likely why I ended up learning to crochet first. But he still has his Mon Tricot Knitting Dictionary, 1030 Stitches Patterns translated from French by Margaret Hamilton-Hunt in 1972 (hey! it's as old as me!).

Email ThisBlogThis!Share to TwitterShare to FacebookShare to Pinterest
Labels: crochet