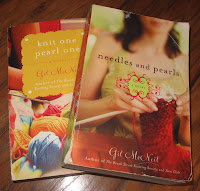 Another favorite series of mine is The Beach Street Knitting Society books by Gil McNeil. The author is English, so her stories are set in a beach town on the coast of England, where the main character Jo Mackenzie has recently taken over running her Grandmother's yarn store. I enjoyed the first book in this series so much that I have passed it around to all of my local yarny friends, especially the moms.

Jo is mother to two young boys with all the trials and tribulations of handling active boys. I can relate much more to her than to many of the younger single women I've found in other yarn fiction. Without giving away too much, there are certain other aspects of her life that I cannot relate to at all, and are a little over the top, but are necessary to set up the storyline of a widowed woman balancing single motherhood with running a yarn store.

The first book, The Beach Street Knitting Society and Yarn Club, introduces a delightful cast of characters from Jo and her family to the Hollywood Diva living on a nearby estate. In fact, the original story appeared in a slightly shorter version called Diva's Don't Knit, which I believe was expanded into this first book.

Jo becomes knitting consultant to the "Diva", helping her incorporate knitting into her movies and becoming friends along the way. As a crochet instructor who used to teach and work in Los Angeles, I have to admit especially look forward to these parts of the stories. I fantasize about getting to share my passion with someone famous. The closest I've come is giving some crocheted scrunchies to my favorite tv actress when I briefly met her at Comic Con one year -- give me a break, it was the '90s.

Anyway, I thoroughly enjoyed the first two books in this series and highly recommend them. However by the time I got through the third book, Knit One, Pearl One, I was a little disappointed. Unlike the first two books, the story had no unifying thread to keep it moving, as if the author had run out of new things to write about the characters and they were just living their lives. On the other hand, some of the knit projects the characters were working on in that third book inspired a couple of my own crochet designs, including one gift afghan which ended up in my upcoming book! So I am certainly glad that I read it!
Posted by Laurinda Reddig