The Journey of the Mystery Machine 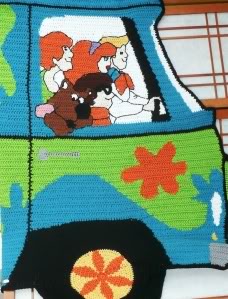 Back in 2011 I did a series of guest posts on the Crochet Liberation Front's Blog. They sponsored the People's Choice Award my Afghan won at the CGOA Competition in September of 2011. This was the first design I ever sent out into the world, and it also won First Place Afghans. Four days after winning I submitted my very first design to be published, and started a whole new career.

When I went to write the story of making my son Griffin his Mystery Machine, it turned out to be over 2000 words. So it turned into a 3 part story...

ETA 2016: The website where this series was originally published has been taken down. I will be republishing each of these posts on my own blog later this fall.