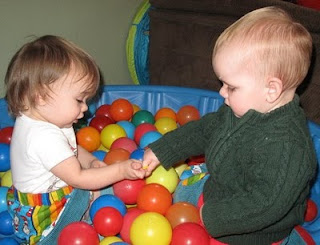 Saturday we celebrated Willow's first birthday along with my friend Carissa's little boy who will be one in just two weeks. We settled on the theme for a joint birthday party about six months ago when I came across cute Dr. Seuss pencils and erasers*. I immediately called Carissa to run the idea by her and picked up a dozen of each for the older kids.

The Dr. Seuss theme came together with discounted fabric from an online co-op which we used to make Drawstring Bags, Bean Bags for favors, and even patches on the matching skirt and pants for the birthday kids made by my friend Jen over at Sunshine Salad.

Everybody dressed the part. The Birthday kids wore matching Thing 1 and Thing 2 Tshirts*. Liam's big sister wore her Cat In The Hat Halloween costume. Carissa and I wore the adult Thing 1 and 2 Tshirts she made for Halloween to match Kate. 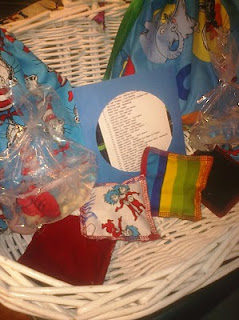 Big brother Griffin helped me fill the Beanbags with millet or split peas. We made (1 Fish 2)Fish In A Bag Soaps with melt and pour glycerine soap* and small plastic fish* poured into clear cellophane bags. Griffin also filled the favor bags: Dr. Seuss Characters on Polkadot fabric bags with Beanbags, Soap, and a special Birthday CD mix for the babies, Cat In the Hat fabric bags with Seuss pencils, erasers, pencil grips, and buttons for their older siblings. All the kids also got to take home two or three Crocheted Egg Shakers which Carissa and I have been making for the past month.

Polkadot covered plates and napkins* inspired the decorations. In addition to various Dr. Seuss books and stuffed toys displayed on every flat surface and we dotted the walls with bright paper circles*. A friend leant me her Cricut so I was able to make Birthday Banners to hang in the windows as well as quotes from the Seuss books.

I even created a Truffula forest of mini cotton candy balls* on paper cones I sprayed yellow with cake decorating spray* to more resemble the trunks of the trees features in The Lorax. 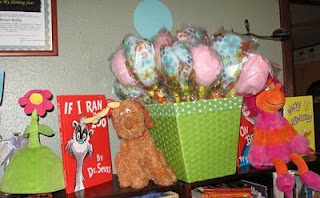 Once we got on the polkadot theme, I was inspired to pull out our bags of bright plastic balls (I used to pick them up at garage sales so we have quite a few) and kiddie pools for a couple baby ball pits which were a big hit. We had Dr. Seuss coloring pages and sticker bookmarks for the older kids to work on in Griffin's room while the babies played. 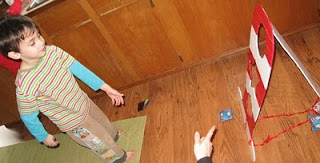 Then we moved into the Game Room (aka, my craftroom) for Creature Bowling*, Pin The Star On The Sneetch (Griffin colored the large Sneetch I drew), and Cat Hat Bean Bag Toss (foamcore hat with red ducttape for stripes). The Hat and Sneetch turned out so well I am going to donate them to the local library for their annual Dr. Seuss' Birthday event, next month. 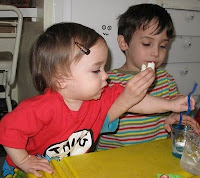 Next was an Indoor Picnic of Green (devilled) Eggs and Ham (rolls with green cream cheese). As well as Bananas, Marshmallows, and Angel Food Cake to dip in the Chocolate Fountain, and a huge bowl of Goldfish Crackers. Willow kept climbing onto the tables to join the big kids and steal their food. 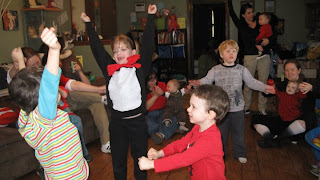 The last activity was the Baby Dance Party. All of the older kids and some of the babies clapped, jumped, and jammed to the tunes on a CD put together by our good friend Caren as a birthday gift for Willow & Liam. I mentioned I was looking for "Activity Songs", ones with instructions for kids to follow, and she came up with 63! Carissa and I narrowed it down to our favorite 33 songs and made copies

We played 7 songs during the party from Rafi's "Shake My Sillies Out" to Eminem's "Five Little Monkeys", and everyone including the grandparents picked one of our handmade Egg Shakers for "Shake Your Egg" from Kindermusik. 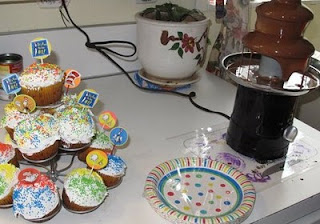 The party wrapped up with cupcakes. Carissa and my cousin Hollie decorated cupcakes with white frosting and tiny bright colored ball sprinkles (easier to clean than colored frosting and tiny enough for babies not to choke on), and topped with simple cake toppers made from toothpicks, punched cardstock. 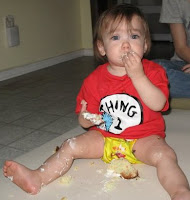 We laid out several large sheets of paper on the kitchen floor, stripped the guests of honor down to their diapers and onesies, and placed a cupcake in front of each of them. Liam gobbled up the whole thing while Miss Willow was more interested in the frosting all over her leg than in eating the cake. After a quick bath and a few lovely presents, everyone headed home and the birthday kids (and their moms) were very ready for a long nap. 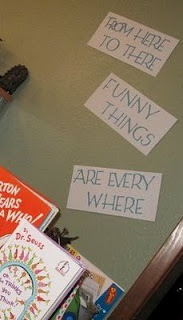 * Dr. Seuss Party Favors 6 packs from Target $1 bins (they have a lot of nice themes but they rotate out often, so if you want it, pick it up when you see it)
* Plates & Napkins, 20 for $1 at Big Lots (rather than 8 for $1.50 at most stores)
* Thing 1 & Thing 2 Tshirts from Bumkins, one of my favorite cloth diaper companies
* Glycerine Soap from Michael's (Tip: learned it looks clearer if you melt & let harden once before putting in container, allowing moisture to be released)
* Plastic Fish 6/$1 at DollarTree (Used mostly "Red Fish" and "Blue Fish")
* Paper Circles cut with my favorite Creative Memories Cutting System
* Cotton Candy from our local candy store, Hollypops
* Monster Bowling set by Melissa & Doug (picked up by a friend at Goodwill for a few dollars, along with a plastic set) 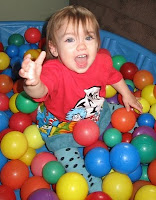 **Special Thanks to our Cousin Hollie for taking all the great pictures.