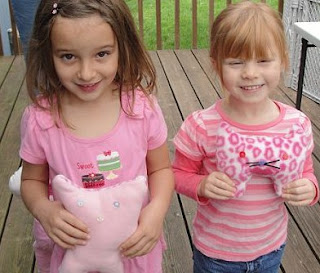 In October, I invited my MOMS Club's Kids to get creative in my craft studio for the second year. With a little help from their moms they get to design and take home their very own monsters. We had mostly girls come to our monster making parties, and my that was a LOT of pink! 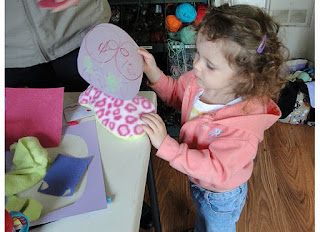 Last year we asked the kids to draw monsters on cardstock, cut out their own stencils, and trace the patterns onto fleece or wool fabric scraps. Inspired by PLUSH-O-RAMA, and articles in Family Fun and CRAFT Magazines, I have been collecting recycled fleece, wool, and corderouy scraps from other crafty mamas for years! Add in some buttons, leftover polyfil, cardstock, and adhesive backed felt (left from Griffin's 5th birthday capes), and I had the makings for a lot of monsters. We only had about half a dozen kids come last year, which was a good thing, as this process was very dependent on having a few moms who could sew, and there were only two of us. 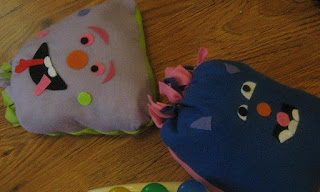 This year we kept it simple with presewn fleece monster pillows, with just one side open for the kids to stuff and tie (with Mom's help). The fringe ties created hair or lots of little legs, depending which direction they put the peel and stick faces on. I presewed three sides because I found that even most 6 year olds, can not tie the knots on their own (except the 2 who had helped us make no-sew fleece blankets to donate). 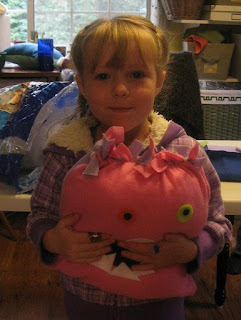 Inspired by a kit for no-sew monster pillows I saw on Oriental Trading Company, I decided to make my own kits for my son's Scooby Doo birthday party last July. I knew we would do the project with MOMS Club in October, so I was able to purchase extra fleece in lots of different colors to give the kids lots of choices. My Dad ended up using the extra kits left from the birthday party for his Spanish language day camp this summer, when they were learning about Chupacabras.