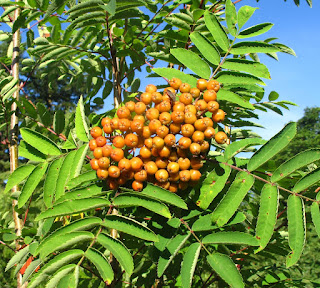 I have always had a thing for tree images and the concept of The Tree of Life. I remember there was a giant tree in Balboa Park in San Diego, where I grew up. Children would climb all over the natural play structure formed by the tree's huge roots, spanning far out from the trunk in all directions, before digging deep into the earth to support the massive trunk. Many Sundays after church, my sister and I would beg our parents to take lunch to the park so we could picnic in the shade of it's green leaves. Until I sat down to write this, I had forgotten about that tree.

When we were thinking about names for our second child, we had agreed on Rowan if it was a girl, and Perrin if it was a boy. I had always thought I would name my children after characters from fantasy novels, so when my husband suggested Rowan, the name of a book by one of my favorite authors, I thought it was a great idea. I am not sure I even knew there was a tree by that name.

After we lost our Rowan, I learned all about the Rowan Tree, or Mountain Ash. A friend of my father's who had an older daughter named Rowan gave us a rowan tree she had raised from a seed. During Rowan's memorial service, we planted that tree in our back yard and surrounded it with pansies, each planted by a friend or family member in attendance. My father's friend even played a piece called "The Rowan Tree" on her harp.

In the nearly four years since we planted that tiny tree, the pansies gradually stopped coming back, but have been replaced with lavender and daylilies (from my Grandfather's garden), as well as glowing toadstools, a few angels, and a little gnome girl who guard the sapling as it grows. A stone custom carved with "Rowan's Garden" rests at the base of our Rowan Tree, now twice as tall as me, which finally flowered this spring. 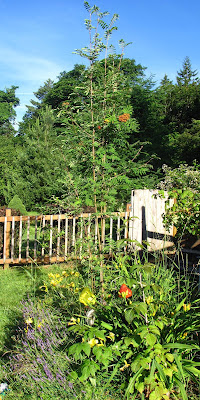 Once we realized what a Rowan tree was, we began to recognize them all over our neighborhood by their orangey red berries, and my almost 7 year old son often points them out in the park or on a walk. Just last night, he came running into the house to tell us, "There are Rowan Berries on our Rowan Tree!" And so there are. For the first time since it was planted, our little tree in Rowan's memorial garden is adorned with three bunches of dark orange berries .

ETA: I wrote this post before receiving the news that my Reversible Rowan Tree Vest just won the Grand Prize at the CGOA's annual Design Competition. Here is my post about Making The Vest, and you can see more photos over on Ravelry.

Email ThisBlogThis!Share to TwitterShare to FacebookShare to Pinterest
Labels: in the garden, ReCrochetions, Rowan