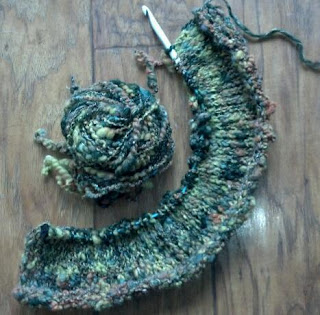 During my first TNNA trade show last February, one of the first booths I wandered into was Denise Interchangeables. They sell sets of crochet hooks and knitting needles in all different sizes which screw on to several lengths of cord with stoppers to screw onto the end to keep your stitches from falling off.

Knitters are far more familiar with this concept than crocheters because all of their stitches are "active" at all times, unlike crochet, they often require a circular needle with a cord and needles on both ends to work on larger projects. So needles where you can change out the length of your cord and the size of your needles to match your project must be very useful.

Interchangeables are also great for crocheters, especially if you want to give Tunisian crochet a try. With Tunisian, each of your stitches is "active" on the first "pass" across your work, then "closed" on the "return pass" as you work the new loops back off of your hook. I had to relearn all of this, as I had only experimented with Tunisian many years ago, before I brought one of the handy Denise2Go sets home from TNNA. 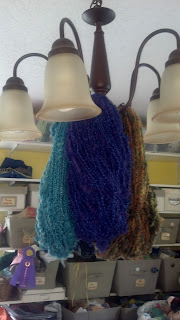 I decided to make something out of a skein of my own handspun yarn, which had been adorning my studio for over a year. Since it is a bulky weight "art" yarn, I used the largest hook in the set, an "M". Once I had the rhythm of the stitches, I found the Denise hooks wonderful to use (and remembered how much fun Tunisian can be)!

I had only ever used the long, awkward Tunisian hooks we crocheters have been limited to for so many years. Holding the shorter hook in my hand took a little bit of getting used to, but having the weight of the work distributed across the cord, rather than weighing down the hook in my hand, makes these hooks so much easier to work with.

The hooks are made of a solid white or colored resin, so although I have been tempted by other brands that might be prettier wood, I am glad I held out and started with these. Although these hooks have an "inline" head, which is not generally my personal favorite, the space between the "chin" and "neck" is large enough that I never had trouble catching the yarn with the hook. Even with my thick and thin arty yarn.

For more on Tunisian crochet, be sure to check out Dora Ohrenstein's  new book: The New Tunisian Crochet. Or if you happen to be attending the CGOA Knit and Crochet Show in Charlotte NC in October, take a Tunisian class with Vashti Braha, Darla Fanton, or Jennifer Hansen. I have had the opportunity to get to know and/or take classes from each of these awesome designers in the past year, and they are all immensely skilled at sharing their unique passions for crochet!
Posted by Laurinda Reddig