Missing: Have you Seen This Bicycle? 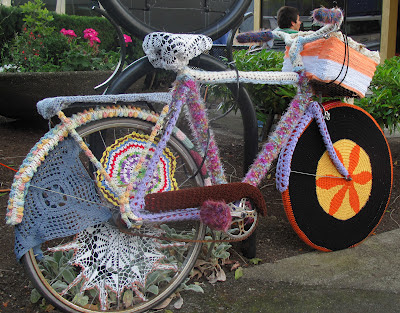 This awesome yarnbombed bicycle has gone missing. Well, it disappeared nearly a year ago, but I figure someone, somewhere must have seen it. I mean who steals a rusted old bike covered in yarn? I just keep telling myself someone must have really loved it and taken it as an art piece. One can dream can't they.
﻿ 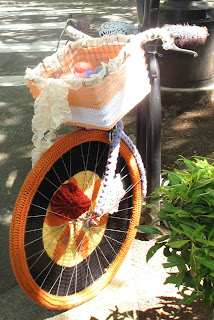 Last year, when we were gearing up for our second year of yarn bombing all of downtown for the annual Quilt and Fiber Arts Festival, I wanted one really big project. I was considering covering a Smart Car in yarn, even stalked so I could ask their owners. But when I heard that the quilters were bringing in a quilt covered VW Bug, I decided to cover the bicycle which was permanently parked in downtown. The bike was no longer rideable, but a local shop owner had decided to leave it parked there and had even planted flowers in the basket
several times.

I was able to track down the owner, and got the combo to the lock so we could move it to my house for bombing. Several friends and I spent days on my back porch and in my studio sorting through the bits and pieces of unfinished crochet projects I had collected, fitting them over the various oddly shaped parts of the bike, and laboriously sewing them on. Oh, did my back hurt by the end of it all.

I had acquired most of the doilies and long strips that cover most of the Frame parts from SCRAP, a local Creative ReUse Store. They take the UFOs mixed in with yarn that is donated and put them together into "Yarn Bombing Kits". But the front tire is actually my first attempt at the wheel to what would become my award winning Mystery Machine Afghan, so I am rather sad to see that gone. If I had continued the afghan to scale with that first tire, it would have been the size of a real van! 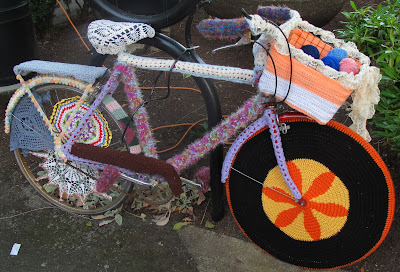 The Basket is wrapped in a long ago started pattern for toddler sized overalls (what was I thinking with those colors?). The ribbon of lace around it is from a jar filled with trim I inherited from a dear friend after she passed away. The Hand Grips and Pedals are covered by fuzzy booties I used to make for my son, but I never quite liked those yarn combinations so had never finished them.

Atop the back Rack is part of a hat, but I realized I prefer hats in the round and knew I would never finish it. Finally the Rear Fender and frame holding the rack are covered in parts of a kids' poncho I thought I would make, but all those bobbles were just not as much fun as they looked in the pattern so it remained unfinished for many many years. And the front of that fender has one little swatch of Reversible Intarsia, because I had to throw some in somewhere. 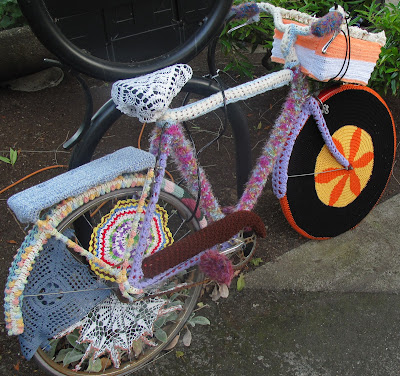 The bike was a hit, with many people posing for photos near it throughout the weekend. The local store owners encouraged us to leave it on display, even after I took down most of the other yarn bombs. Imagine out disappointment when just a few weeks later the bike had mysteriously disappeared, presumably stolen.

So, have you seen this bike?
Posted by Laurinda Reddig