Crafty Kids Review: There Be Dragons! 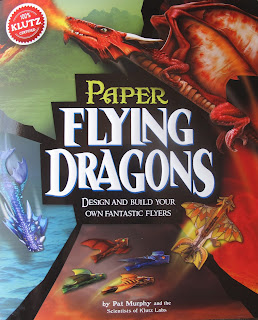 You never know what will catch your child's attention and imagination. I always pick up a few new crafty projects for birthdays and Christmas presents. My son just turned 8, and the week before his birthday I happened to find this awesome book of Paper Flying Dragons from Klutz. I bought it because it was on sale, but had no idea how much fun it would provide.

Yesterday he pulled it out and insisted I help him make some. The larger dragons easily pop out for quick assembly, so he just needed a little help reading the instructions and cutting out the smaller "hatchlings". After we finished the first few dragons, he spent the morning flying them all over the house. The instructions were very clear, so he was able to complete most of the remaining dragons on his own.

The next thing I knew he was looking for "nests" for each of his new dragons and their hatchlings. I had several small twig wreaths I had come across while reorganizing, which are now scattered around every surface in his bedroom. We had to get a little creative when we ran out of wreaths and used baskets crocheted from hemp and fabric. 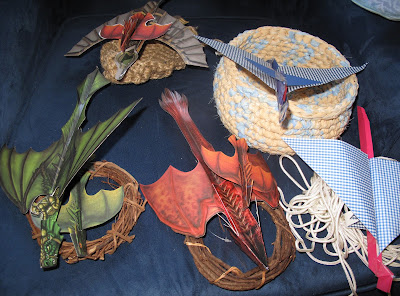 Then he gathered the "mama" dragons and flew them outside to gather "food", returning with a pile of leaves to distribute among the nests. Next was collecting small plastic lids for water troughs, which I had been saving to add to his recycled craft materials stash. 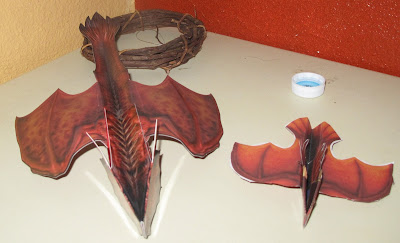 Feeding and watering his dragon families kept him occupied all afternoon. By evening he began designing his own dragons from precut paper triangles and cardstock strips (scrapbooking supplies purged from my studio). The projects in the book inspired him to design his own. 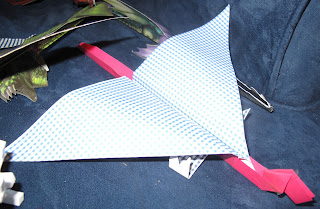 Of course each large one needed a baby, and then a nest.... And today he is helping his little sister make her own set of dragons. What a great investment, this could go on for days or weeks! He has just announced that he wants to make his room into a magic land and wants to know, what other magical creatures he should add. What would you add?
Posted by Laurinda Reddig