This was my last afghan I was still finishing the night before I had to ship the rest of my samples to Interweave (on the way to the airport for TNNA in June 2013). I had planned to make one more row of squares for a total of 20 squares (which would have shown off the pattern even better). But when my contractor did not work out, I simply ran out of time and decided 16 squares had to be enough. At least it is the perfect size for a lapghan!
The quilt that originally inspired this design had the same repeated colors in each of the squares over and over. I replaced the colorful box blocks with the Nine Patch Square, and alternated the colors in those squares. But it was my friend (and end weaver) Carissa who saw me laying out the sample squares and suggested that the “cards” in each Card Trick square should match the colors of the nine-patch square they were pointing to. The pattern within a pattern created by this small change really brought the design together. 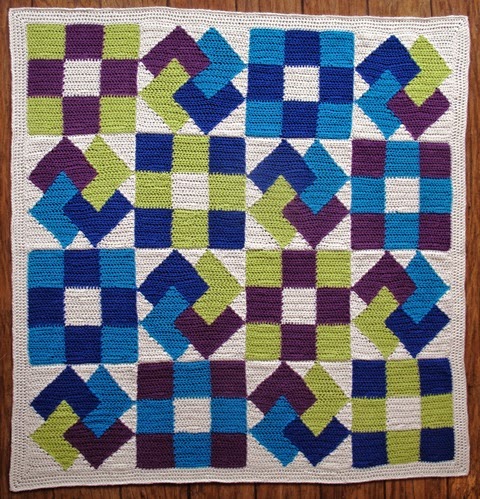 A funny story about the title for this one, when I was at TNNA a couple of months ago, Sara Wilson (aka The Sexy Knitter) invited my roommate (Angelia Robinson) and I to go see a play with her one night. She didn't remember the name, just that is was a murder mystery. When we walked up to the theater, I could not believe that the play was called, "The Game's Afoot" just like the blanket in the book I was at TNNA to promote!

It seemed like it was meant to be for me to end up at that theater. They even mention that the name comes from Shakespeare's King Henry the V, which is where I got the name from. I looked for a quote that included the word "card" or "game" and settled on the one that starts off: "Once more unto the breach, dear friends, once more.."

And as I wind up the last of my posts about the projects in Reversible Color Crochet, and ponder what my next big project will be, this quote seems particularly appropriate. I cannot believe I made it 32 days without missing a day. I will continue blogging about the book, events, and a lot more. But perhaps not every day (though I already have them planned for the rest of this week, so who knows).