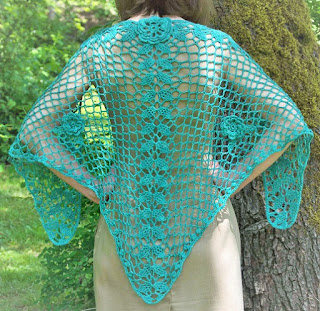 Last week we revealed the various elements of our very first Ficstitches Yarns Kit Club, which we shipped out last month. So I finally get to share my contribution to the Kits: Ailee's Wedding Shawl.

This project represents a lot of firsts for me. My first time:

I generally enjoy the challenge of working within just one skein. But I quickly realized that I needed more yarn for the ideas we had in mind to incorporate some of the types of crochet we found while researching what may have existed in the time period of our story. There just isn't a lot of crochet history as far back as colonial times, and what there is are mostly theories.

So, after two other nearly completed shawl designs and our writer making some changes to the story, I finally came up with the idea for this version. Although the type of crocheted lace known as "Irish Crochet" was developed later, I decided to start with a large Irish Rose at the center and work out from there. 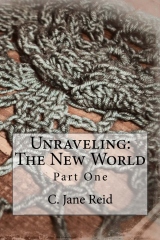 Our main character, Ailee Donaghue, is traveling to the New World from her homeland of Ireland, so I liked the idea of a modernized crochet interpretation of her shawl that is described in the story. Traditional Irish Crochet typically starts with a variety of separate flower and leaf motifs, all connected later with a network of chain loops. However, Ailee's Wedding Shawl begins with just a few Roses, then works the leaves directly into the lace, joining the flower motifs as you go.

I spent over a week experimenting with the stitches to get the effect I wanted. I poured through my stack of stitch dictionaries, combining a variety of stitch patterns in different ways until I was satisfied. I was certainly grateful that the Lilt Sock Yarn I used, from Black Trillium Fibres, was no worse for wear after so many times stitching and frogging.

When I'm designing something new, I tend to start with these dictionaries of stitch patterns, then inevitably tweak them to fit my ideas. In this case, I took my adjusted version of an Irish Rose pattern from one book, inserted it into the center of a leafy doily pattern from one of my Japanese diagram books, then changed the stitches between the leaves to chain loops, and worked out how to cut off the top of the doily to form a triangle. Finally, I looked to yet another book for edging ideas, trying several variations before I was satisfied!

A long process, but I ended up with at least two other nearly completed designs that were developed along the way. Now that we have allowed for more yarn for future Ficstitches Yarns Kits, we can use one of my original shawl designs for one of next year's kits! Now that the kits have been shipped, the pattern is available on Ravelry, and we just started an online Crochet-Along in our Ficstitches Yarns Group for anyone working on it over the next couple of months. And if you are in the Vancouver/Portland area, we will be doing a Live CAL at Blizzard Yarn and Fiber starting July 31st. Join the fun!
All Photos Copyright Guy Holtzman (except book cover)
Posted by Laurinda Reddig