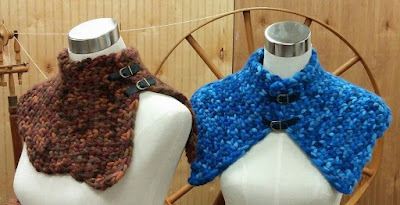 "I recalled the way the armor seemed to flow from head to neck to shoulders, like a mantle or a monk’s cowl, but close, protective. Thick. And an image began to form in my head about that sort of thing in wool." - Unraveling: The New World, Part Three by C. Jane Reid

My design for our third and final Ficstitches Yarns Kit Club of 2015, Grahame's Gorget, was inspired by the piece of armor that protects the neck, called a "gorget". When faced with the need to protect her husband from an unknown threat which seems to attack neck and be repelled by wool, our heroine, Ailee, finds a quick way to turn the wool fleece she has into a protective garment. 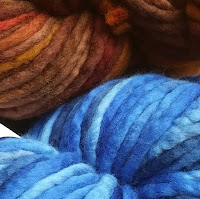 By spinning a very thick yarn (like the super bulky Dredz yarn from Abstract Fiber included in Kit #3), she was able to quickly make a dense fabric to fit around the neck. Using short rows allowed me to to add width around the shoulders while keeping the neck more snug, . I like the idea that as a novice stitcher, the finished garment looks a little lumpy, as if she added and lost stitches a little randomly as she worked. But once you lay it out, you realize that the increases are quite intentional, creating an unusual shape that is easy to wear.

Since crochet was not commonly known in the colonial time period of our stories, I have been experimenting with various stitches that look a little more like knit, by inserting into various insertion points. If you have tried any of my edgeless crocheted cables, you will be familiar with inserting in the "lower-bar" of the stitch. If not, the pattern includes a photo tutorial showing where to insert your hook, and I will be adding more thorough tutorials here on my blog very soon. 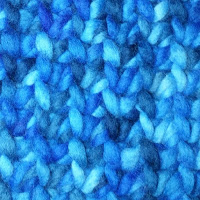 For this kit, I got the chance to make the leather closures, inspired by harness straps in the story. With the chunky yarn and large hook, it will be easy to slide various types of closure between the stitches so you can wear the cowl open at the shoulder or the front. Additional suggestions for buttons or seaming are also included in the pattern, to give crocheters options to really make it their own.

If you haven't already, don't miss out on our first Kit Club of 2016, available for Preorders, This Week Only! This next kit will include a stand-alone story following one of the characters introduced in Ailee's story, which you don't want to miss! 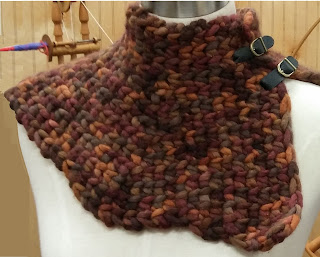 The pattern for Grahame's Gorget is also now available on Ravelry. The pattern will also be one of 9 patterns inspired by Ailee's story, coming out end of March 2016!