I always take the week off before each of my kids birthdays from work crafts, to focus on making favors and decorations for their parties. This week I find myself making another batch of superhero capes, this time for my daughter's 6th. She's been running around with capes for the past few months, left from the batch I made for her brother's party when he turned five (5 1/2 years ago). So, I'm using the same pattern (saved from that first party) to make capes again, this time with stretch velvet and bias tape at the top to keep from stretching. 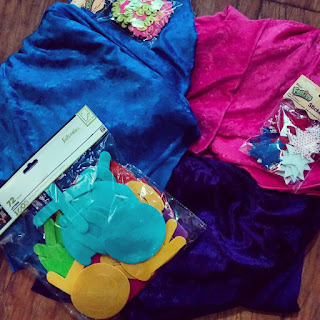 But in looking back at what I did for G's party, I found an entire blog post I wrote back then and never posted. I always meant to add more links to resources and pictures. But, today I figured I would share that post, and you can find lots of pics of my first Superhero Party on my original party post.

From August 2010:
There are so many great ideas online for Super Hero parties I wanted to share some of the ones we used (now that I have more pictures). I was amused to find that even Tory Spelling did a superhero theme for her son’s birthday. I began to think it has all been done before. Griffin helped me choose which activities he wanted to do, filled the goody bags, piñata, and even helped me bake and decorate his birthday cake, a chocolate cake with yellow frosting and a red Super G symbol.

For once I started shopping early for party supplies. I hit the stores the week after the 4th and found tableware & decorations on clearance. What is more superhero than red and blue stars? I hit the $Tree and Party City early as well, after checking prices on Oriental Trading Company (my usual go to for party supplies and themed favors), and did not end up ordering anything.

I caught a great sale on Satin fabric at Joane’s for the capes. I knew it would be easier to have all one color, but I loved the idea of kids running around in all different colored capes. So I bought enough of 6 different colors to make 4 capes in each. I decided I would make 24 capes, assume I would have leftovers, and sell the extras as Design Your Own Superhero Kits on Etsy (if I ever open my store).

Next I made a pattern by folding one of Griffin’s capes in half and tracing a similar shape onto foamcore. My sister and I bought a serger a couple of years ago, but we never got it working right. I managed to break the needles the first time out. Turns out regular sewing machine needles do not work in a serger. Who knew? Once we got the serger running I made the 24 capes in just a couple days, and now I am pretty darn comfortable using the machine.

I got some great ideas from Ambrosia Girl’s blog including a mask pattern and source for adhesive felt. I used plastic to make stencils of her mask patterns for Griffin to trace onto sheets of stiff felt (which I found on clearance at Michaels).
I was racking my brain on how to make sturdy Training Manuals the kids could take with them to each station. My sister designed the pages for me. But I was really excited when, inspired by the Vancouver Recycled Arts Festival, I came up with a great recycled cover for the manuals. I sell bras and just could not bring myself to throw out the large pile of plastic packages I have accumulated. I realized that the creases on the packaging would be perfect for folding the manuals open, and I could bind them with binder clips from the office supply store.

Our piñata was also entirely recycled. Awhile back Griffin saw a Spiderman piñata in a store. I told him we could make something similar. But the more I thought about it, I did not think we wanted the kids bashing in Spiderman’s head! So we decided to make Venom (much simpler to paint I might add). I had picked up a couple of extra large balloons to make it with at $tree. But when those popped in the prickly grass, I found an old balloon I was able to untie and blow up to make a perfect piñata. Earlier in the summer Griffin made a piñata at Spanish camp, and the teacher suggested using just plain old starch (in the blue bottle) which worked perfectly.

Other moms have told me that I had better be careful, or I will have to keep making his parties bigger and better each year. But when asked, Griffin still says his favorite birthday party so far was “the one where we chased the ladybugs,” when he turned two. I was just glad that when we were pulling up to yet another birthday party at JJ Jump last spring he said, “I want to have my party at home!” So I will make it as fun as I can as long as he wants his parties at home.
Posted by Laurinda Reddig