Another fine, wet summer in the northwest, what to do cooped up inside once school is out... Griffin decided to break in his new bedroom with a painting fest. He did manage to keep most of the paint on the designated 'drop cloth', painting everything from "an alien" to "a cave and those are the two eyes of a bear peaking out." He just kept painting pages until he had filled up the plastic, then started in on decorating an egg carton to be used for seed starts. 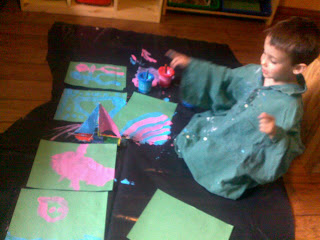 While working on cleaning the Craft Room, we came across a bunch of colorful plastic animal beads. He immediately wanted to put them in something to make a Bead Shaker to entertain his baby sister. We quickly downed a couple of small water bottles, dried them out and began filling them with the animals and various other plastic beads. 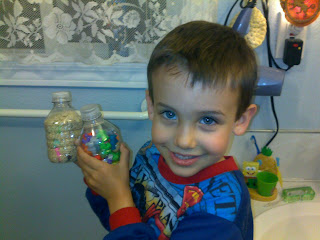 When I suggested we make a "Search and Find" bottle he spent the rest of the day collecting small items to include. I told him to look for things smaller than his thumb, and nothing too squishy. Rubber band okay, scraps of paper no. Once he placed his collection of various shaped beads, shells, legos, etc... into the bottle, we filled the rest almost to the top with some rice from the cupboard and glued the lid on. Now he wants to make a card with a list of all the things for people to look for. 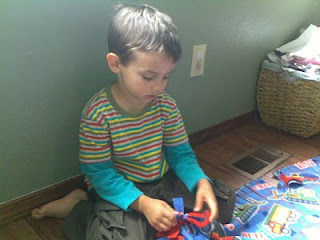 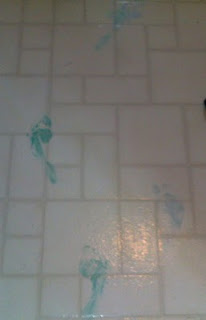 Inspite of the chaos in my Craft Room, Griffin is usually very good about only using HIS craft supplies and asking before he gets into anything he is not sure about. But the other day while he and his friend Kate were "huntin' for clues", I discovered a trail of little green and blue foot prints leading into the bathroom (where they were hiding behind the toilet). They had managed to cover their feet in ink while her mom and I were busy in the front of the house with our new babies. What could have been a disaster led to a fun afternoon of water play as they were thrown in the bath, clothes and all, with old bars of soap. The ink wiped right up as well. Now off to Michaels to raid the $1 aisle for more craft projects to keep these kidlets out of trouble... after we finish the coffee filter snow flakes Griffin just decided we should make.
Posted by Laurinda Reddig