We started making more of the stitch markers this week to thank those who completed the 7 in 7 challenge making at least 7 Cat Blankets in 7 days. When Griffin found the earring hooks, he decided to start making sets earrings. Then he moved on to beaded key chains and bracelets. He did the designing and beading, and I just pinched the wires and tied knots in elastic. 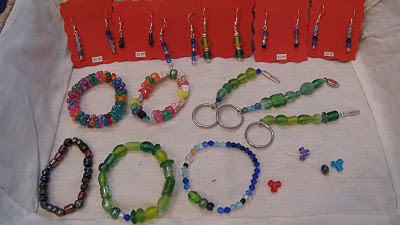 He decided that we should put them in a box and go around the neighborhood "knocking on the doors of people we know" to see if they want any of his wares. He brought me a scrap of paper to make a sign reading "Griffin's Goodies" that he taped on the top of his box and hit the streets. 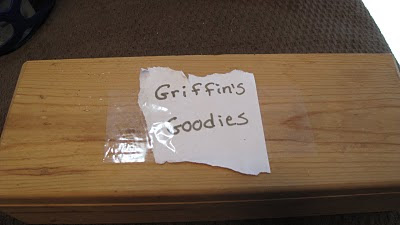 At each house he asked people if they wanted anything. Mostly he just gave them away. But those who asked if he was selling them were told, "The bracelets are one dollar, the earrings are two dollars, and the keyrings are zero dollars." Though I think the last one changed depending on if people said they did not have money at the time. 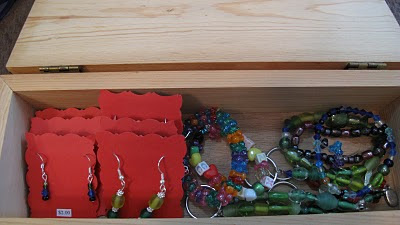 I told him he could save any money he made, or we could take it to the bead store and he could pick out his own beads instead of using whatever I have on hand. He was excited about going to the bead store, and has been asking to make more things to put in his box for the past two days. Maybe we will come knocking on your door next...
Posted by Laurinda Reddig